An Introduction to Chebyshev polynomials and Smolyak grids.

This is an 'interactive' introduction to learn about Chebyshev polynomials and Smolyak Grids. It aims to both teach the concepts, and give an idea how to code them in practice.

To use you will need to also download: https://au.mathworks.com/matlabcentral/fileexchange/50963-smolyak-anisotropic-grid and add it to the Matlab path (or just put them in your active folder).

Proceeds as follows. First: look at some graphs of Chebyshev polynomials (just to have seen what they look like) Second: introduce the idea of curve-fitting. Do this first with standard polynomials as it is likely more intuitive, then with Chebyshev polynomials. Third: how can we do this in higher dimensions? look at inner-product, then discuss limitations of this and how Smolyak grids help us.

1. Chebyshev polynomials of the first kind are defined as Tn(x) = cos(n*arccos(x)).

Can also define them by a recursive formula which makes computing them much faster.

chebyshevT(n,x) represents the nth degree Chebyshev polynomial of the first kind at the point x 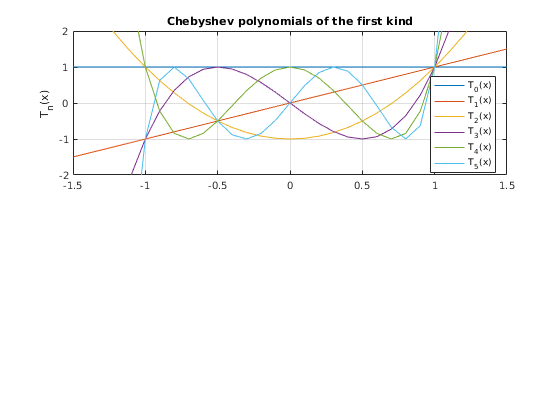 Chebyshev polynomials of the second kind are defined as follows: U(n,x)=sin((n+1)*a*cos(x))/sin(a*cos(x))

chebyshevU(n,x) represents the nth degree Chebyshev polynomial of the second kind at the point x 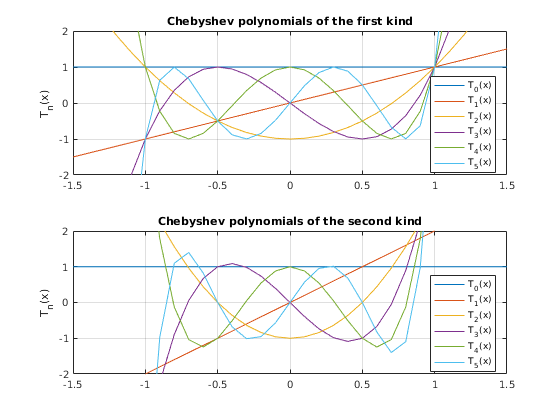 2. Say we have some points and we want to fit a curve to them. 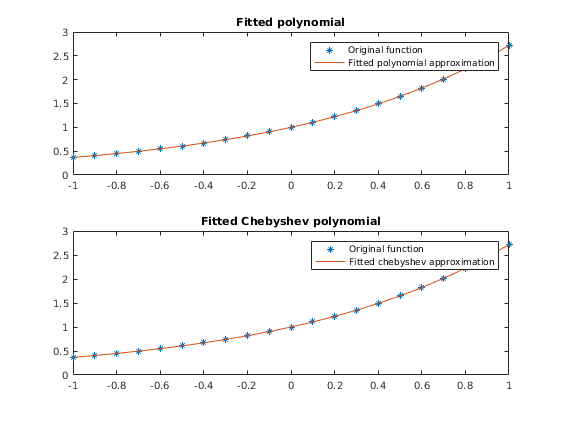 Fitting Chebyshev polynomials when the domain is [a,b] rather than [-1,1] 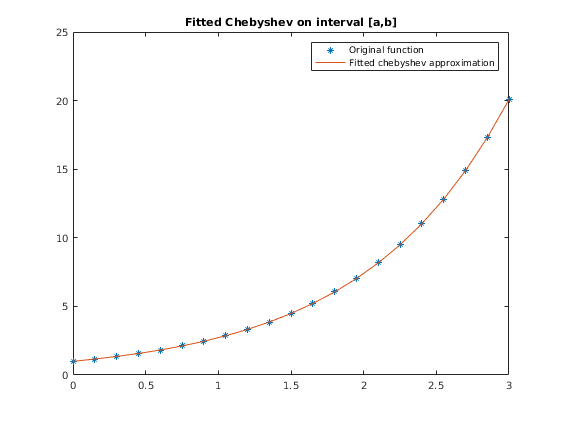 Until now the function to be approximated as just one-dimensional. What about higher dimensional functions?

We can use 'other products' of chebyshev polynomials to reduce the number of coefficients required. Smolyak grids are one approach to doing this. Smolyak grids have a 'level of approximation' parameter, mu, that determines how many grid points (and hence coefficients) will be required. [eg. for the two dimensional case, Smolyak grid has 1,5, and 13 points for mu=0,1,2 respectively. The tensor product of 5 points in each dimension would involve 25=5^2 points.]

While the concept is simple enough the algebra is hard and the final formulae are convoluted. Judd, Maliar, Maliar & Valero (2014) provide the formulae.

http://ice.uchicago.edu/2011_presentations/Judd/Approximation_ICE11.pdf (pg 22 of 25) NOT IMPLEMENTED SAVING figure(5) FOR THIS

Formula for coeffs is also on bottom of 2nd page of http://icaci.org/files/documents/ICC_proceedings/ICC2009/html/nonref/10_3.pdf

Rather than just using tensor product of the 1D chebyshev polynomials. Use JMMV (2014) codes: https://au.mathworks.com/matlabcentral/fileexchange/50963-smolyak-anisotropic-grid An anisotropic grid is used, meaning that the 'level of approximation' for the Smolyak grid can be set differently for different dimensions. 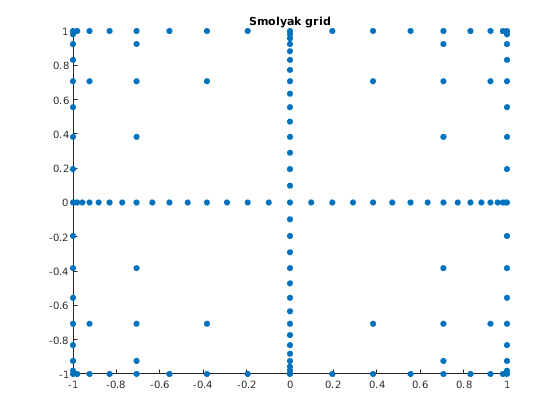 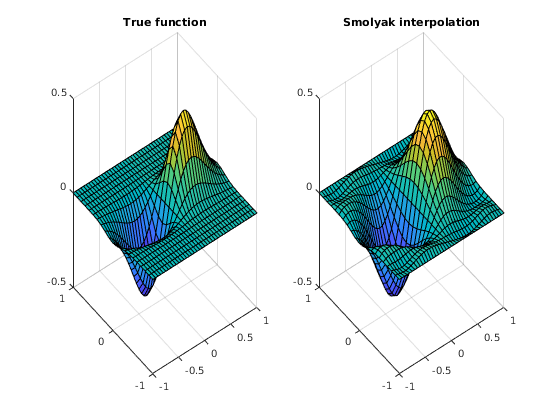 A bit of related Theory explaining Smolyak grids and sparse grids in general.

How should we do integrals when our functions are in Smolyak-Chebyshev form?

Welcome to the bleeding edge of numerical computation. Quite simply this is a hard problem and one to which we do not yet know the answer.

One obvious answer would just be to evaluate the entire function on a non-sparse grid and then just take the integral there using standard quadrature (or monte-carlo) integration methods. While easy to code it does of course defeat the entire point of using a sparse grid in the first place.

Monte-Carlo integration methods do not appear to perform as well as the above mentioned (according to JMM2011).

The codes of JMMV2014 allow for the grids to be anisotropic, meaning that the degree of the Chebyshev polynomials can be different in each dimension. Conceptually this is an easy idea to get your head around, but the actual implementation/algebra is tricky.